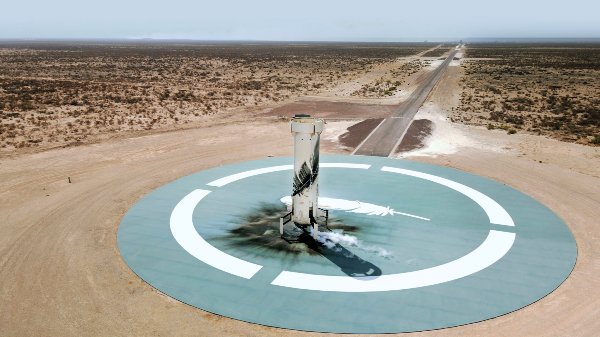 Space flight and space travel just made history as billionaire Richard Branson took his debut trip to space aboard his Virgin Galactic’s VSS Galactic spaceship. Next up is Jeff Bezos, founder of Amazon and his space company – Blue Origin. Bezos is set to take his first space flight aboard the New Shepard rocket on July 20.

To note, Jeff Bezos’ Blue Origin was supposed to be the first human space flight. However, Branson and his company beat Bezos in the space race. So far, Blue Origin’s New Shepard has already made 16 flights. But the upcoming liftoff will be the first to carry people aboard, including founder Jeff Bezos.

Going into the details, the upcoming space flight is expected to last around 11 minutes. The New Shepard rocket is expected to fly well above the 62-mile (100 KM) Kármán line that is recognized as the boundary of space. The rocket will return autonomously to its launch site and land, and the crew capsule will descend beneath a parachute.

This is just the beginning. Watch the launch live on July 20 at https://t.co/7Y4TherpLr. Broadcast starts at 6:30 am CDT / 11:30 UTC. #NSFirstHumanFlight pic.twitter.com/W0yGMftwoW

Blue Origin’s New Shepard rocket capsule has a maximum capacity of six people and includes large windows for astronauts to take in views of Earth. The first space flight will carry four passengers who include billionaire Jeff Bezos; his brother Mark Bezos; Wally Funk, a pioneering female aviator aged 82 years; and Oliver Daemon, an 18-year-old physics student at the University of Utrecht in the Netherlands who will be the youngest person to travel to space.

As noted, Jeff Bezos’ space travel is scheduled on July 20 at the Blue Origin launch site one, near Van Horn, Texas. The liftoff is scheduled to begin at 7:30 AM EST (at 5 PM IST). If weather conditions permit, the final liftoff is expected at 9 AM EST (around 6:30 PM IST). The entire space flight is expected to last around 11 minutes.

One can watch the launch Livestream at BlueOrigin.com. To note, Branson live-telecasted his space flight. It remains to see if Bezos would do the same to take on his space competitor. That said, there will be a press conference once the crew lands back on Earth and there will be regular updates on the BlueOrigin official Twitter account.

You have already subscribed