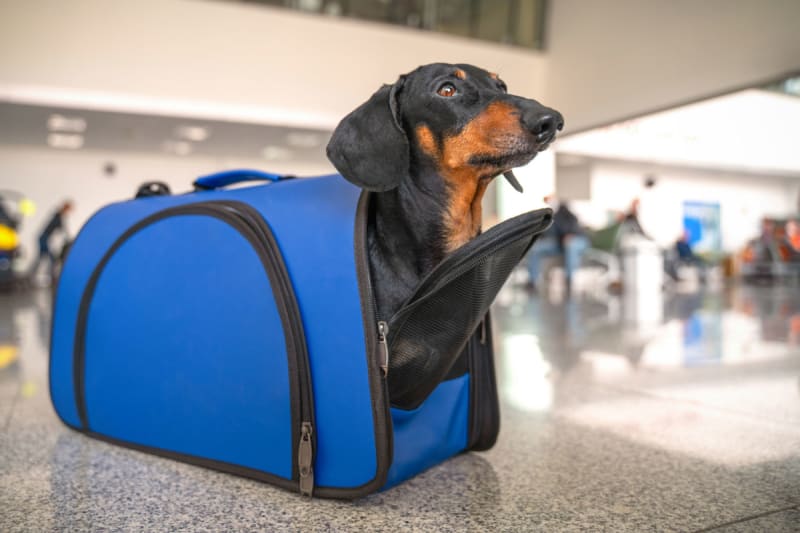 90% of those who tried to certify their pet as an emotional support animal for travel purposes succeeded, but major airlines, along with the U.S. Department of Transportation, are cracking down.

As more people get a COVID-19 vaccine, we could see an increase in travel just in time for the summer vacation season. But those who plan to fly with a furry friend may find rules have changed since their last trip.

Emotional support animals, previously ticketed and able to board with their owners, may instead have to fly in cargo. Service dogs can continue to ride by the traveler’s side for free, but airlines can require forms that attest to the animal’s health, behavior and training.

ValuePenguin surveyed consumers to get their thoughts on the new restrictions on emotional support animals and uncovered some surprising trends. Even with horror stories of animals on flights going viral, many flyers would take a seat next to an animal over one next to a baby.

While many consumers enjoy flying with animals, nearly 40% have encountered an issue

Emotional support animals are animals whose presence is meant to provide comfort to a flyer, but under the new U.S. Department of Transportation guideline, these animals are no longer considered service animals. A service animal, as defined by the Americans with Disabilities Act (ADA), is a dog trained to perform a task or duty for a person who has a disability.

What do flyers think about support animals on board? Many don’t mind it, and some even enjoy it: 48% of Americans reported feeling happy seeing an animal on their flight and 10% said animals help reduce their in-flight anxiety. Still, 56% of Americans said they would rather sit next to an animal than a baby.

But there are flyers who are less than thrilled to see animals aboard — 11% of Americans are annoyed by them, 10% feel anxious due to fear of certain animals and 9% get sick because of an allergy. People who prefer not to fly with animals may have also had a bad experience.

Nearly 2 in 5 people have been on a flight where there was an issue related to an emotional support animal. Indeed, several animal-related incidents on planes have made headlines over the last few years. In 2019, a dog bit an American Airlines flight attendant on the hand, while in 2014, an emotional support pig defecated in the cabin before the plane took off.

Delta’s senior vice president of corporate safety and security cited an 85% increase in animal incidents since 2016 as a reason why the airline will no longer allow support animals. While many enjoy flying with animals and need them for support, abuse of the policies and an upward trend of disruption could put passengers at risk.

Over a million passengers brought emotional support animals on flights in 2019, and reports of incidents were on the rise, according to a report from Airlines for Americans. This surge in animals on board isn’t surprising considering how easy it is to get the required documentation.

About 1 in 5 Americans (19%) with pets have tried to get them certified as an emotional support animal to get them on the plane, and a whopping 90% of them have been successful.

Millennials and Gen Xers are most likely to bring an animal aboard — 26% of millennials and 25% of Gen Xers have tried to certify their pet in order to fly with them.

While minimizing red tape is a good thing for people who needed to bring an animal aboard for comfort, it could have led to abuse of the system, resulting in recent restrictions. That said, not all pet owners who certify their pet as an emotional support animal do it to get on flights — 15% of consumers say they do so for another reason not related to travel.

Should emotional support animals be allowed on planes? Consumers are split.

Even with increased occurrences of animal-related in-flight disturbances, Americans are undecided on whether emotional support animals should be banned.

About 34% of people fully support the ban, 30% don’t agree with the ban and 20% support allowing animals but believe they should be restricted to only people who truly need them.

While most people think there should be rules in some form regarding animals on planes, 20% of people think pets should be allowed without any restrictions. Only 7% said animals should not be allowed under any circumstances.

For some, pets are more than companions — they’re family members who often tag along for trips. Close to half of pet owners (49%) have flown with their pet before, and a majority (64%) have been completely happy with that experience.

The ideal travel situation for most is sitting beside their pet, even if it comes at a cost: 80% of Americans would be willing to pay more for their pet to travel with them in the cabin instead of checking them into cargo, but most wouldn’t be willing to spend much.

Only 1 in 5 would be willing to spend more than $300, which is more than the average cost of an airplane seat. If there’s no choice but to pay for a pet’s ride now, the pet fee is just one more expense owners will have to factor into the equation when saving for a trip.

6 tips for traveling with a pet

The ban on emotional support animals isn’t a ban on animals altogether. Pets that provide emotional support may still be able to travel, but not for free if they’re not a trained service animal or with you in the cabin if they don’t meet size restrictions.

If you’re planning to take a trip with a pet, here are some tips that can help you prepare:

ValuePenguin commissioned Qualtrics to field an online survey of 1,550 Americans, conducted Feb. 19-22, 2021. The survey was administered using a non-probability-based sample, and quotas were used to ensure the sample base represented the overall population. All responses were reviewed by researchers for quality control.

We defined generations as the following ages in 2021:

While the survey also included consumers from the silent generation (defined as those 76 and older), the sample size was too small to include findings related to that group in the generational breakdowns.